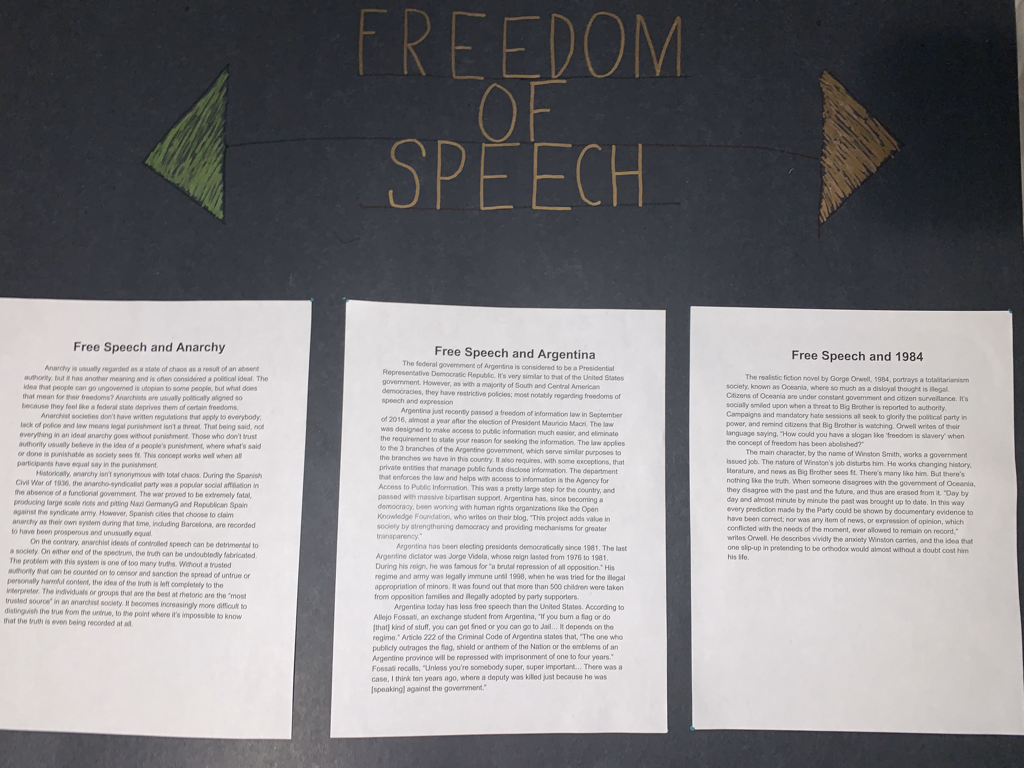 The seminar did change my perspective on the book, but not so much because of the topics we discussed. I hadn’t finished the book at the time, and was unaware that Winston eventually trusted another character and was captured because of it. That made the risks associated with thought crime more clear. Throughout the beginning of the book, winston tells us his anxiety around what he learns to be his own ideals. He is almost able to tell just by the ideas ones shares whether or not they’re to be vaporized. The idea that he falls victim himself proves to confirm his anxieties. That is the theme that the seminar brought to light for me. The idea that someone is so thoroughly unfree in their thinking and being is more dystopian than anything else I’ve ever encountered in literature.

The context of this book is extremely relevant when asking questions about it’s implications and similarity to possibility. Most importantly in a historical context, looking at how the government might be able to rewrite the past. In the book, 1984, an entire branch of the government devotes time and resources to correcting every form of literature to form a coherent lie to their leisure. World War II ended in September of 1945. Scholars will say that the book was designed as a warning saying that by 1984 (35 years later), this is where the globe could be. Which seems about right, given the absolute power certain governments had during that period. Overall, I don’t think it’s a possibility in the current state of the world. Although many people have no hope, I do. I think as intended, this literature has been studied and taken, in fact, as the warning it was intended as. People today, I like to believe, have learned from the past. Although today’s United States shows symptoms, I believe it’s a different disease we suffer from.

I see two of the fourteen defining characteristics of facism as getting out of hand in our country; the first being obsession with national security. In late 2018, we saw massive coverage of a migrant caravan that conservative media and politicians caught by the teeth. It was widely used to invoke public fear and FOX News was found to have used years old footage of someone climbing a fence with a backpack, completely unrelated to the then current influx of families making a journey in search of asylum. Since 9/11, national security tends to be a big issue that remains on the table throughout politics. The other fascistic characteristic I see becoming prevalent in our country is the idea of fraudulent elections. Fraudulent elections are the biggest threat to a democracy. In 2016 the Russian government was demonizing a United States presidential candidate online, impersonating american internet users. Although it can’t be confirmed to have had an effect on election results and wasn’t perpetrated by the United States government, it is threatening to our democracy nonetheless.